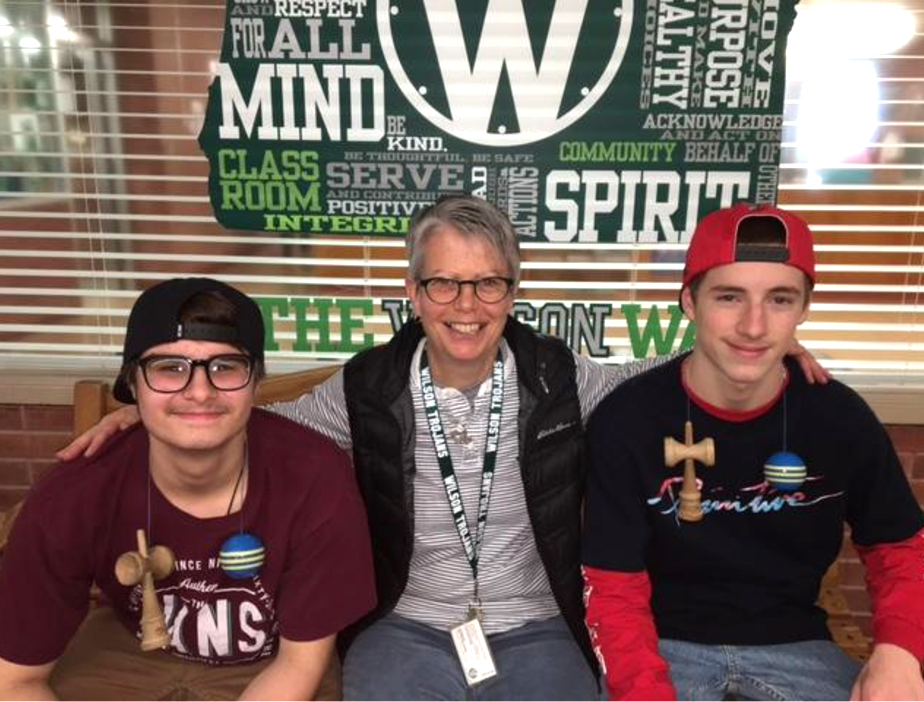 Tucked away in the idyllic Hillsdale neighborhood of SW Portland, Wilson High School might not seem like a struggling community. But in an urban school in suburban Portland, Oregon with over 1400 students (and projected to grow to 1700-1800 in several years), there are hundreds of students with needs- from housing and shelter, to those in foster care or who come from dysfunctional families. Very few resources are available for low income families in the area, which means serving that population must be done in school.

That’s why, less than two years ago, school principal Brian Chatard made the decision to hire full-time social worker Maureen Brennan on staff, the first in a Portland high school. He also brought a mindful studies program to school- the first in the nation to bring a for-credit class in mindfulness to a high school.

“We needed more proactive measures to deal with kids and trauma,” says Chatard, “rather than be reactive. Having a school social worker is an action to get a head of the problem. To create a school environment where there are people students can go to, and get ahead of kids who are spiraling out and end up as drop-outs.”

It’s proactive measures like these that has steadily improved Wilson’s graduation rate from 77% in 2012, to 90% in 2016- one of the top in the district, and a standout above the state average of just 75%.

“Maureen is the protector of the underbelly of this school,” says Chatard. “An indispensible cog in this engine for kids that go unseen in the community. Prior to having a full-time social worker, these are things that the regular counseling department would have to deal with and manage. With a caseload of 350-400 kids, means that you triage. You have classrooms that you have to deliver counseling curriculum, you have 100’s of letters of recommendation you need to write a year to colleges, so you don’t have time to get to know kids that are circling the drain.”

That’s where Maureen steps in. On any given day, you will find students gathered in her narrow office for school supplies or a sandwich (she keeps her room stocked with peanut butter and jelly) or one on one meetings about grades. She makes trips to visit parents at home or work to keep them engaged, and goes on “walkabouts” around campus to bring students back to class after lunch. She has attended school drug and alcohol related hearings to support students and families and to provide them with resources and referrals for services. Brennan has also helped families find shelter, provided them with food and clothing and even faxed paperwork to the lawyers of parents who had been incarcerated. On top of this, she also co-advises the Gender Sexuality Alliance, meets with special education and health teachers about curriculum and attends equity and school climate team meetings.

It is Brennan’s unique background that allows her to advocate and provide direct services for those dealing with trauma, and connecting them with the right resources. She started her career in psychiatric day treatment for 4-6 year olds; she served as a protective services worker at DHS investigating reports of child abuse and provided case management to children and families; she supervised a street youth program at Outside In; she worked as a child and family therapist and even supported the geriatric population. From every age group, Maureen learned the different systems which allows her to access different resources for a wide-ranging group of students. The addition of her social work training and expertise allows the school’s counseling team to meet the many needs of high school students and families.

“Anything to make sure they don’t fall through the cracks,” says Brennan. “I’ve got the best job at Wilson. I love my job. I feel like every school should have one (social worker).”

Follow school social workers in the Oregon legislature. Oregon House Bill 2648 passed the House unanimously in March, so it will now head to the Governor’s desk for a signature. The bill adds school social workers to the list of professionals who can receive grant money to reduce student absenteeism using a trauma-informed approach. The professionals listed in the bill that created this program, which passed in 2015, included school nurses, school counselors, school psychologists and clinical psychologists.