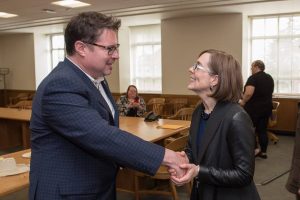 Salem, Ore. – Gov. Kate Brown has announced a bold plan to improve the lives of Oregon’s foster children. Gov. Brown has called on the legislature to spend $14.5 million this biennium to hire 185 new staff members at the Department of Human Services (DHS), including 75 social workers. This comes on the heels of an audit released by Secretary of State Dennis Richardson, which revealed rampant dysfunction in Oregon’s foster care program.

NASW has consistently said that social workers must be part of the solution to Oregon’s foster care crisis. Social workers receive extensive training, take a rigorous exam and are licensed to protect the public, making them the most qualified to serve as the professionals in child welfare. The high ethical standards of social workers will help DHS avoid the crises that have befallen the agency in recent years.

In order to implement this plan, the legislature needs to take action and designate the necessary funds in the state budget. “NASW will be working with legislative leaders to ensure the Governor’s request is prioritized,” said Stone.

Meanwhile, Gov. Brown has proclaimed March 2018 to be National Social Work Month in Oregon. “Social Workers continue to engage and bring together individuals, communities, agencies and government to help society solve some of the most pressing issues of the day,” according to the Governor’s proclamation. NASW thanks Gov. Brown for recognizing the contribution of our professionals to this state, and we remain committed to helping move Oregon forward.

The National Association of Social Workers (NASW) is the largest membership organization of professional social workers in the world. NASW works to enhance the professional growth and development of its members, to create and maintain professional standards for social workers and to advance sound social policies. For more information about the role of social workers in child welfare, view the Standards here:https://www.socialworkers.org/LinkClick.aspx?fileticket=_FIu_UDcEac%3D&portalid=0

The NASW Oregon Chapter is a state chapter of the NASW. It was founded in 1971 and represents social workers throughout the state of Oregon. To learn more, visit http://nasworegon.org/.